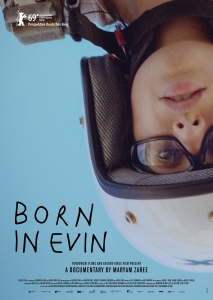 Interview by Jenny Karakaya during the premiere at Berlinale

Iranian-German writer-director Maryam Farzee has long yearned to discover the truth about her birth in one of the most notorious political prisons in the world. During that time, her parents were incarcerated for rebelling against a regime, which is still very much alive today in Iran. An ambitious and daring undertaking, the actress made her directorial debut, while realizing her dream at long last with her documentary, Born in Evin, which premiered at the Berlinale Film Fest.  I had a chance to sit down with Farzee to chat about her film and being a woman in the film biz.

Jenny: Talk about the reception of the film and how people have responded so far?

Maryam Farzee: It was very powerful. People were very moved. They were crying even after the screening. My wish that had really impacted people on deeper layers of our being, has really to some degree, fulfilled itself.

Jenny: How long has this film been in the works?

Maryam Farzee: The process was over four years and it had left a deep, deep impact on my life, but doing the movie was much more my artistic expression and political engagement to do it, to say it’s important that we go into these places that we’re afraid of. It’s important to go into the underworld of things that we deny, that is scary to us, but we have to look at them. And if I manage, as a protagonist, to look at them maybe the audience can feel invited to ask questions too.

Jenny: Was it a cathartic experience to make this film?

Maryam Farzee: Yes, absolutely. The cathartic moment is that it’s actually not that we don’t have no rights for any answers. We don’t. The survivors don’t have to answer us. They’ve been through so much. So, I don’t have any judgements if they wanted to talk or not. But the second generation has a right to ask questions, and I have the right to be. And I have the right to find my own narrative.

Jenny: What did you learn about yourself throughout this journey?

Maryam Farzee: In the beginning, there’s the story of the Talmud where they say that the child knows everything and in the moment of his birth, an angel blows the candle out and the child forgets it all, and during the process of the life, it has to remember. So, I think that this movie was sort of remembering something that we all always knew. And that has to do with some form of interconnectedness and love

Jenny: Talk about being a female in this business as an actress and as a filmmaker. Are there any challenges that you face being a woman, especially in Germany?

Maryam Farzee: No, absolutely. It’s a fact that women don’t get their movies funded, they don’t get the platforms, they don’t get the support. They’re not represented enough. And I thought it was funny how Jill Soloway once said, “Okay, now for 100 years no man should make movies so that we get to find our voice,” and that’s true somehow.

But yeah, it can’t be denied that that’s a fact. But things are slowly changing. In a beautiful way, they’re also changing, because it’s not about just gender and that we need women to do movies, but we will have another way of storytelling. And the stories will be, the people we portray, will be portrayed also differently. And I think, I hope, at least that’s what I tried in my movie, to change the structures behind … to create an equal representation the way my characters are portrayed and the visual film language, to have that differently. And also, as you know, that there are so many women portrayed in my film. There is a deeply feminist approach to what I do, and I think our voices have to be heard.

Jenny: There’s this whole initiative that’s happening during Berlinale to sign a pledge for gender equality, so hopefully that’s going to  make a difference.

Maryam Farzee: Yeah. I also believe in the quota that we, at the moment, are discussing. It’s insane of how we’ve still got this boy’s club of … It’s just insane. It has to change, definitely.

Jenny: What is your advice to other female directors or film makers now that you’ve embarked on this journey?

Maryam Farzee:  I think, to some degree, to have a heightened, real awareness of not just trying to play the game, how it’s in play, but it’s about revolution. And revolution and change happens when we question ourselves and don’t just repeat what has been just because now I’m a woman, I will do the same thing. It’s not just doing the same thing. It’s about how do we wanna tell stories? Who are we going to portray? How are we fighting for the structures to change?

So, just to have that awareness that we are on the forefront of some real change and that we have to question ourselves and what world we wanna live in.

Jenny: And what are your future goals in film making?

Maryam Farzee: Well, it’s funny, I mean, it’s amazing, but the Royal Court Theater in London has just invited me to a writer’s residency. So, I’m going to write a new play. I have written a play before, and because of that play, they invited me to write a new one. So I’m going to do that. And then, I do wanna write fiction, I’m coming from fiction. I don’t know. I needed to do this film as a documentary, but I work with fiction.

Maryam Farzee: There’s a lot of them, but one thing that I can say is I have this American coach and theater maker, Larry Moss, who I’ve worked with for a long time, and after acting school I did a workshop with him, and he very clearly said to us as actors, he said to us, “It’s not about you. It’s about the story you wanna tell and it’s about serving something that is much bigger than you are.” And I think that is very important too, that even though I did a film that is so personal to me, it was never about me. It’s serving some bigger purpose.

Jenny: And who is your role model? Who do you look up to?

Maryam Farzee: I have so many. I mean, all these political figures, these really amazing ones. I’m thinking Martin Luther King, and Mandela, and Gandhi. These people, to me, are still such an inspiration.

Jenny:  And in film?

Maryam Farzee: Yeah, I’m amazed by the woman, like I mentioned, like Jill Soloway that was there and what she’s doing right now, how she’s changing things, and I look up to her. I really, really admire her.