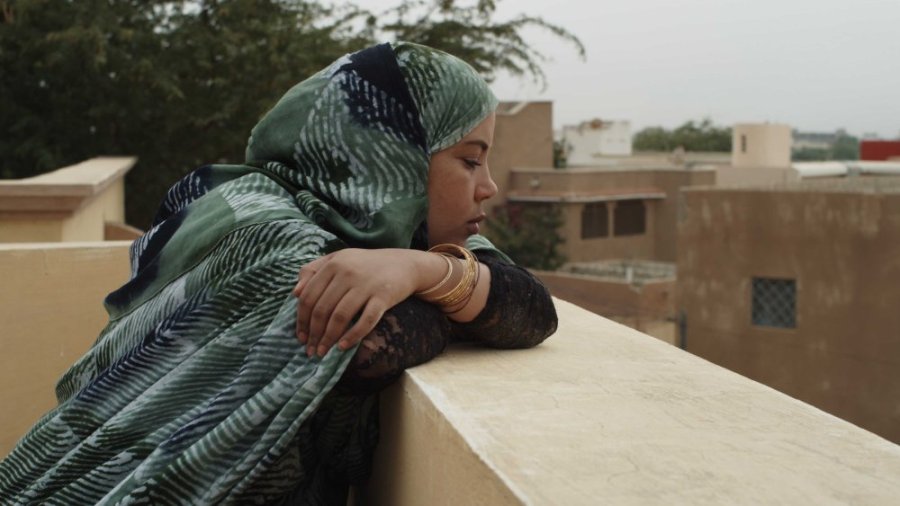 Interview by Jenny Karakaya during the premiere at Berlinale

In the western world, where so many women are starving themselves or trying to fit the esthetic mold of what society and the media wants us to look like, it’s unfathomable to imagine that anyone would do the complete opposite to fit in. In some parts of the world, that is precisely what women are still expected to do before marriage. They are force fed to gain weight, aka gavage, to be given away.

Italian writer-director has told this story beautifully in her latest film, “Flesh Out,” which premiered at Berlinale. A brave and challenging undertaking, she felt the courage to reveal her insecurities by highlighting that women worldwide, are all alike. We are all fighting the same war, so why not stick together for the greater common good and embrace our similarities instead of our differences. I had a chance to chat with Occhipinti recently in Berlin, about her fascinating film, her cast, her struggles and wishes.

Jenny: As a female filmmaker, why did you feel that this story in itself was important for you to make. For people to see.

Michela: For me, it’s important because I hope that it will let the viewers ask themselves some questions rather than giving themselves answers and more than anything, I really wanted to tell the story for a personal reason. Even if only one girl gets out of the film saying, ‘You know what? If here it is considered beautiful to be thin and in another part of the world it is considered beautiful to be fat, if aesthetic patterns are so different, then they don’t exist.” I’m thinking especially about young girls.

I remember, it was a long time ago, but when I was a young girl around 16, I was fragile. I was very insecure. But it was easier at that time because you only had magazines, cinema, tv. Now, with all the social media, with cellphones that have all these apps that you point at yourself and you become perfect. If you are a fragile young girl you will feel inadequate but you are adequate. You’re very adequate the way you are. I hope the film can help change one’s mind, one’s attitude towards oneself, which I think is important to build starting at a young age.

Jenny: Women have always had it tougher. We never feel like we are enough.

Michela: We have to quit doing this. I like myself and more than anything I’m happy with my life. But I’m always saying I’m old, who cares? We are all becoming old. We are all going to die.

Jenny: How was the script conceived?

Michela: I bumped into an article, a very short article that talked about gavage and then I thought, “This is the story.”

At first glance it seemed so crazy, but we are doing exactly the same. The shape you’re trying to obtain is totally secondary. Whether it’s aiming to be fat or aiming to be thin or aiming to be young or aiming to be something that you’re not already, the path is exactly identical. Whether you’re taking fattening pills or pills to get thinner. So, I thought, “This is the perfect way and nobody knows about this subject”. So, it’s interesting to dive in.

Jenny: What is gavage?

Michela: Gavage is the practice of force feeding, many times a day and at night by consuming milk, couscous, millet, lamb, very greasy and substantial food so that you gain enough weight. The goal is to try to get to 100 kilos, which is a bit draining on your body and your psychology.

Jenny: Why do they need to do this?

Michela: It’s a sign of wealth, because if you can feed your daughter, it means that you’re wealthy. It’s a symbol of social status and when they do it to young girls, they develop earlier, and so they can be promised in marriage to a man. In these parts of the world like Mauritania [where we filmed], it’s the man who gives the dowry to the bride’s family. So this is very important.

Jenny: As a female in the filmmaking business, what have been some of your struggles and triumphs?

Michela: To tell you the truth, apart from that observation they made when I was young and told me I was too old to be a director, the challenges were not because I was a woman. I think the difficulty was because I do projects that are always very complicated but I choose them. So I am the one who is looking for doing complicated things. Because for me, I like films of any kind but if I have to spend a lot of time doing a film, it has to be about discovery. For me too. It has to be a big adventure. Going to Mauritania and having to research and find out something I totally don’t know, I have only read about, is difficult, complicated but so fascinating that it’s like a treasure hunt. I want to know more, I want to go and see behind the corner and once I reach that corner, I ask myself “What is at the end of that street?” I have to be driven…

People sometimes ask me, why don’t you film in Italy? and I say, ‘I don’t know, it’s too close, I want to go somewhere that I really don’t know anything about like when I went to film in the desert of India the story of the postman. I like to go searching for my character. Not in a traditional way but you go into the streets of your city or of another city to just dive into a different world and try to absorb as much as I can.

Jenny: How has the film been received so far?

Michela: I tell you, yesterday [at the premiere] it was maybe one of the most emotional nights of my life because for me being selected in Berlin is like a rollercoaster. Because I never thought that I would ever come to such a big festival and then I was overjoyed because the cast, Verida, Amal and Sidi finally made it, they were not granting the visas for the girls until the last minute. So they arrived yesterday morning. They were supposed to arrive on Friday. And I am also very glad I read good reviews too.

Some who wrote details of the film that I would have loved the audience to perceive. That moved me also.

Jenny: The women in your film were so talented. Did they have any previous acting experience?

Michela: Verida was a model for a cell-phone campaign but that’s it. Yesterday she said, this story is 70% based on her personal life. She never acted. She did a couple of adverts but with no dialogue. Amal, never acted in her life. In fact, she’s a filmmaker. She is young, she’s 24. She made a very interesting short film. I trained them during shooting because most of the time they arrived on set they didn’t know a single line. So, for the first two hours, we would repeat them, and it’s double time because you say the line, then you say it in Arabic, then they ask questions, they translate again. So everything took double time.

At the beginning they overacted a bit, and I tried to tune them down, but they were amazing. Amal is a natural.

Jenny: Both actresses were amazing.

Michela: Verida is amazing because she has this depth. That’s why I chose her. When I saw her, I knew that she was the one. I didn’t know if she would act well, but she did. For me her eyes are so expressive. And she’s amazing because not a lot happens in this film and she is able to transfer a lot of subtle emotions.

Jenny: I also loved that you left the ending open to interpretation.

Michela: Because you have to ask yourselves questions. I don’t want to give an answer. Her image appears and then vanishes. Whatever she will do with her life whether it is getting married or going to Cairo with Amal, or taking her life, she’s getting rid of her image for sure.

Jenny: I felt like she was liberating herself. That she was also removing herself from that life. That’s my interpretation. What did you learn through the experience of making this film, about yourself?

Every day that I was shooting, I have a little girl that is five years old and I left her behind [to make this film] and I was devastated. Every morning, I would get up and say, okay, you have to make it worth it. And to make it worth it, the film can have its flaws, you are full of flaws. It has to have its flaws and I like people with flaws, but, there has to be heart in it. Otherwise, it’s not worth it.

Jenny: What are your goals for the future? What would you like to do next?

Michela: In the last two months, I have had a project that is not leaving my mind.

We are completely used to other people’s misery. We see it and then we go on. I am amazed at how we don’t stop immediately. Whatever we are doing, to just do things to help people and the planet. Because we are in deep shit. A lot of people sleep in the street. We pass by them. Yes, sometimes we give some money. When I was young, I was not like this. For each person I saw, I would feel heartbroken, not that it changed the facts, and I would always leave some coins, which I still do sometimes. But I thought about it, I was walking one day, and I went past, and I said, why I’m I watching without seeing? Why am I not stopping and asking this person how are you? Do you need a blanket? Where are you from? Did you eat today? Why don’t we care about people we see in front of us? And also being aware that the world we are living is not just what we are seeing in our city, or our country. Why aren’t we living with this sense of microcosms constantly? That we are in the world first than anything else?

Michela: I would like to shoot in the US.  I want to go in a place between the border Oregon and California. I’ve spotted it already. But from a totally different perspective.

One thought on “Interview with Michela Occhipinti, “Flesh Out””